Home Flax: From Seed to Spindle

Flax: From Seed to Spindle

”The next thing to this, which our English housewife must be skilful, is in the making of all sorts of linen cloth, whether it be of hemp or flax, for from these two only is the most principal cloth derived, and made both in this, and in other nations”

Throughout recorded history, flax has been cultivated as an important crop for textile production as linen. During medieval times, linen was the most important plant-based cloth available in Western Europe. For millennia, growing flax and processing it for spinning and weaving was one of the major tasks in any woman’s life. This was the fiber that provided the cool clothes of summer and the under-tunics for the family, the coverings for the bed at night and the grave-clothes for wrapping the dead. It was a valuable and much-needed commodity. 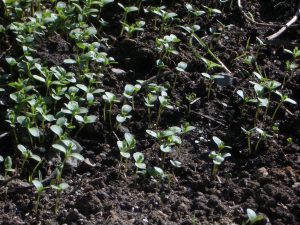 The flax plant has its fibers inside the outer edge of the plant stem. These fibers extend from the root of the plant to the upper tip of its stem. To maximize the length of the fibers produced, flax seed is sewn densely in the field, so that the plants grow quite closely together. This insures the plants grow straight, with no branching along the stems.

You can see how closely these seeds were planted – this is approximately one week after germination, two weeks after planting, when the young plants are just becoming established.

These plants are now about six weeks further along, and you can see how tightly they are planted, and how well they are growing thin and straight, with no branching and no space for weeds to grow between them. 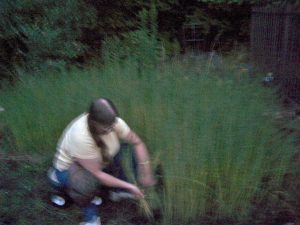 Flax plants are harvested just as their seed heads are starting to ripen, so that the oil is not drawn into the seeds and out of the stems, weakening them. Flax is harvested by pulling it up by its roots, not cutting it, so as to preserve as long of fibers as possible. The plants are then bundled together and left in the fields temporarily to dry them, until they can be processed further.

“The watering of hemp or flax

”Now for the watering of hemp or flax, the best water is the running stream, and the worst is the standing pit; yet because hemp is a poisonous thing, and infecteth the water, and destroyeth all kind of fish, it is more fit to employ such pits and ditches as are least subject to annoyance, except you live near some great broad and swift stream, and then in the shallow parts thereof you may water without danger.”

The fibers in flax grow just inside the outer layer of the stem. Once dried and the seeds removed, the fibers in the flax stem need to be extracted. This is done by a process called “retting” — literally rotting away the non-fiber parts of the plant. This can be done in one of three ways: dew retting, still water retting or flowing water retting.

Dew retting is the simplest method for rotting away the non-fibrous sections of the stem, as mold does most of the work. As the mold works, it turns the straw a silvery gray – a color that is transferred to the fibers inside the stem.

Water retting submerges the flax straw into some sort of body of water. The method works by using bacteria to rot the plant material, producing a blonder fiber than that produced by dew retting.

Retting flax in running water is perhaps the least common of the present-day methods. However, since I had a reasonably deep creek available, I took the opportunity to attempt this method, once the most common for large-scale flax processing. 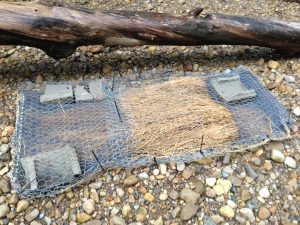 Any submersion of the flax will require weighting down, as the retting will produce gasses that force the plants toward the surface. In running water, containers that allow the water to flow through must be used, and the flax and their weights need to be tethered in place.

You can see the chicken-wire container we used to hold the flax and some pieces of concrete block used as weights. We tied the sides of the container 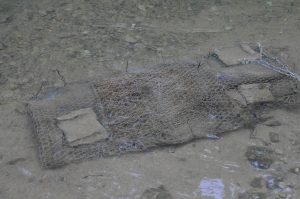 together, to keep the package flat while under water, and tethered everything to the shore with chains.

Running water retting requires much less time than any other method. This straw went into the creek on June 10th, and was ready to be removed on June 15th. 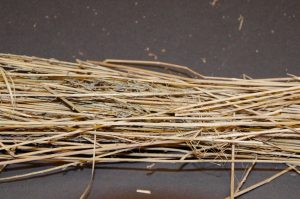 Here are some close-up pictures of both unretted and retted flax. As you can see, the unretted straw is still smooth and few of the fibers have emerged from the stem. The retted flax, on the other hand, has the outer layer of the stem completely removed, and the fibers are clearly visible.

This close-up of the retted flax clearly shows the remnants of the outer plant material on the straw, and the fibers being freed from the stem.

Once the flax is fully dried from the retting, it is ready for the actual extraction of the fibers from the stems in preparation for spinning.

The first step is breaking the flax — literally breaking the stems in several places. This was traditionally done by striking the bundles with a grooved wooden mallet, or by using a more elaborate flax break. Either way, the idea is to break the hard husk of the stems and the pith at the center of the straw, and loosen them from the fibers running through the stem. You can see here how effectively a flax break can be on the straw. 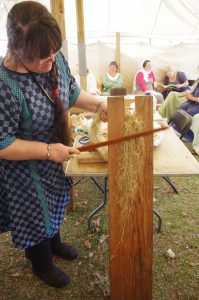 Once broken, the straw bits must be knocked off the flax fibers. This is done by holding bundles of fibers, hanging through a slot cut in a vertical board (used to protect the hands during the process), and striking the bundles an oblique blow using a bat or sword.

The flax is often scutched twice, shaking the first round of tow fibers out before beating it a second time. The first beating knocks away the outer covering of the straw and softened the inner pith of the stem. The second round cleans out the remaining tow, so that the straw is ready to be hackled.

The tow knocked out of the bundles of fibers in both rounds is often saved, to be further processed and used for rougher thread and cloth. 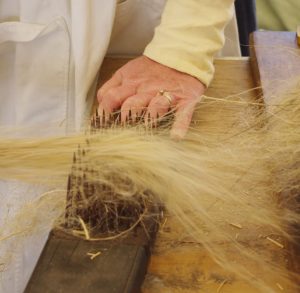 The final step in cleaning the fibers is hackling — dragging the fibers through a series of combs, each finer than the last, in order to separate the individual fibers that might still be sticking to one another. This cleans most of the straw bits off the fibers, and also eliminates the last of the shorter tow fibers — leaving the long fibers aligned and ready to be dressed on the distaff. The final bundle of fibers will be 20″-30″ long, and will taper at both ends. This is line flax, ready to spin.

The tow flax, combed out by the hackles, can once again be saved and spun. It will still have some of the straw included in it, , but it can be spun for weft. The yarn will not be as smooth as that from line flax, as the fibers will vary from an inch to ten inches in length.