Once a large enough cache of spun thread was accumulated, actual weaving could commence. The loom I used is a 36” wide, 4-harness jack floor loom. This is a size that would have been reasonable for a period loom, and was the widest loom I had available to me.

The horizontal loom arrived in Europe around 1000 AD. It represented a great advance in technology over the vertical, warp-weighted loom, making it possible to weave long lengths of cloth at speeds that were totally unattainable on the older, more primitive looms. Treadle looms of this general sort can be documented well back into period, with the earliest clear illustration being from an early 13th century English manuscript. There are many specific details have changed over the centuries, but the early medieval horizontal loom is much like today’s modern loom in basic appearance. 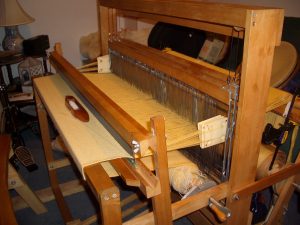 I warped the loom to its full width, with 20 ends per inch (~8 ends per centimeter), in a 15-dent reed. The intent was to get as wide a fabric as possible given the equipment available, and to produce a fabric of moderate density, but not so heavy as to be stifling if worn inside for a Baronial Court. Since I wanted to make a wedge cloak — taking a measured length of fabric and slicing it on its diagonal, in order to make the greatest use of the fabric — making it as wide as I could weave meant I might save myself having to weave yet a greater length. I chose, for symmetry, to plan for six wedges per cloak, each to be 6 feet long. That meant I needed at least 36 feet of woven cloth, after washing and fulling. I knew the weaving would take up even more warp length — the simple shifting of the threads up and down, as they are woven results in some shortening of the warp — and I had no way to accurately calculate how much take-up to allow, so I allowed for at least 30% to be very generous, and measured out a 48 foot warp.

I chose to weave a simple 2/2 twill. This is a very common weave, that can be documented throughout medieval times and in many settings. Since I was planning this for baronial regalia, I needed to keep the project as generic as possible, to make the cloaks appropriate for whatever persona future Barons and Baronesses might use. A 2/2 twill would fit anywhere at any time, given how ubiquitous this weave is in archeological finds throughout Western Europe. For examples, see the charts of documented woven pieces in Bender-Jorgensen (1992), Crowfoot, et al. (1992), and Ostergard (2004).

I wanted to ensure the selvedges of the cloth were as strong and solid as possible. One problem with twill fabrics is a tendency to stretch on the bias. (Think about how tight a newly-washed pair of jeans is, and then how they gradually become much more comfortable. This is a consequence of the twill fabric stretching to better accommodate your body.) 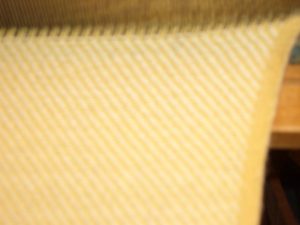 I had read of tablet woven selvedges being produced in period — more usually on a warp-weighted loom than on a horizontal loom — and tablet weaving has the advantage of being very solid and non-stretching. While some instances have been documented of tablet-woven selvedges being woven and added onto fabric after the cloth has been woven (see Knudsen, 1998, for example, dated to the Roman Iron Age) , there are many more instances of tabletwoven selvedges being woven along with the fabric. (See the many examples cited in Hoffman, 1974.) Many “paired-twined” selvedges (i.e. tablet woven selvedges made using two threads per tablet, instead of four threads) are noted in Crowfoot, et al. (1992 — see particularly the charts of selvedges in the chapter on wool textiles, pp. 29, 33, 38, 46, 48). I chose to use four threads in my tablets for the added stability and non-stretch qualities it would give my selvedge. 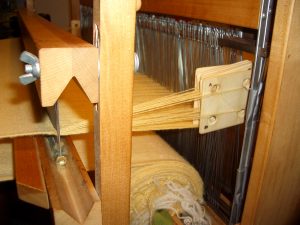 I warped the tablet woven selvedges separately from the rest of the warp, as the take-up from tablet weaving would be noticeably greater than for regular weaving. Threads in regular weaving are moving up and down past each other, while in tablet weaving, threads are twining around each other, producing small, four-ply ropes. This results in greater take-up, so I very generously warped each tablet with 60 feet of thread — more than enough no matter how much take-up there might be.

All the selvedge tablets were S-threaded, to minimize the chance of the thread unplying itself while weaving. I wove the selvedge with the tablets constantly turning toward me, so twist built up fairly quickly. Because these threads were warped separately, I could pause between each bobbin I emptied in my shuttle and untwist the warp. In all, this added some time to my weaving — I could weave several inches in 15 minutes, but needed another 15-20 minutes to work out the built-up twist.

I had several problems to solve, as I started weaving the fabric. At first, the warp was very fuzzy and sticky, and it was difficult to get a clear shed to weave through. I tried using a sizing/hair detangler on the thread, in hopes that it might lessen the clinging of the threads, but it didn’t seem to make any difference. I finally decided that the harnesses of the loom simply were not rising up high enough to produce the shed I needed, and I made several adjustments to the set‐up of the loom:

1) I raised the loom up onto 2×4 lumber, to allow the treadles to travel further down and the harnesses further up.

2) I clamped a spare back beam onto the loom, to raise the path of the thread another couple inches and give more clearance; and

3) I adjusted the ropes pulling the harnesses so that they were as long as possible, giving the treadles more slack to work with. Ultimately, this worked, and my sheds cleared after the first few feet of weaving.

Another problem I had, early on, was threads breaking in the tablet on the far left edge. Since it didn’t seem to be any one thread in particular that was breaking, I was at a loss to figure out why they all broke seemingly at random. Closer examination of the reed in the loom finally revealed that the last dent was narrower than any of the other dents. Since I had no way to widen the dent, and little desire to constantly repair broken warp threads, I decided to sacrifice that last tablet, and weave with 5 tablets on the left selvedge and 6 tablets on the right selvedge. This proved to be more than adequate for selvedge width.

The fabric was woven over the course of a year, with Real Life intervening several times to slow my progress. Ultimately, the fabric was declared “done”, due to approaching deadlines, and was cut off the loom and measured. The original length off the loom was over 40’. The width averaged nearly 34”. I had not reached the end of the warp, when I took the fabric off, so I was interested to note that the waste still on the back beam was only about 4’ long. I might have been able to weave another foot or so, but I was very near the end of the warp when I quit. 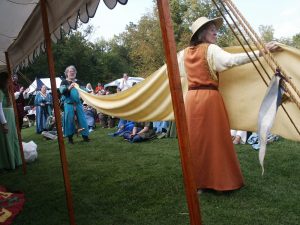 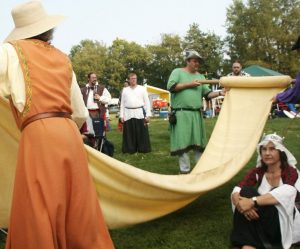 Harvest Days – The Rest of the Fabric at Court

Once off the loom, the fabric was washed and lightly fulled in a large tub on my back porch, waulking it in much the same manner as described by Gordon (1982), though without the fuller’s earth. While the fabric might have been fulled more, I didn’t want to risk fulling too heavily, and losing too much length in the process. The effect of the fabric in the current condition is good. The squares in the following photos are 1” x 1”. 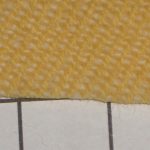 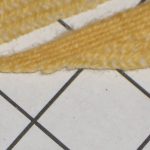 Conclusions (Weaving ‐ Loom):
Overall, I am quite please with the fabric I produced. It is a good “coat” weight, ideal for a cloak, and the drape and hand of the fabric is quite comfortable. I can tell which sections I wove early on, and which were woven later, when I was more experienced. I can also see where I changed bobbins, as I wove, as a result of using handspun weft from different fleeces. I am certainly no longer daunted by the prospect of taking on this large a project, though I will probably wait for a year or two before attempting anything quite this large again.