For comparison, the size of the weft thread, as spun.

Once a supply of carded wool was ready, I passed it out to several volunteers. Each was told that the thread needed would be fairly thin and smooth. While the volunteers contributed greatly to the cache of spun thread, I was still responsible for probably 75‐80% of the thread that was used in the weaving.

The thread for the weft in the project was spun, for the most part, on a flyer and bobbin modern spinning wheel, though certain portions were produced using a drop spindle. I chose to hand‐spin only the weft thread for the cloaks, as I wanted to make the project as much a group effort as I could. I passed out cleaned and carded fiber to several volunteers, and taught interested people how to spin on a drop spindle, if they wanted to join the project. 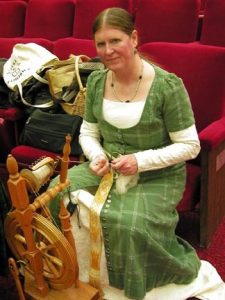 Spinning on a castle wheel

I had two main reasons for choosing to spin only the weft thread by hand. Knowing that the spinning abilities of some of the spinners I would be recruiting (and training) would not be up to the strength required for warp thread, I wanted to use their thread in the low‐stress portion of the weave. Also, spinning the warp thread would have delayed warping the loom for many months, since the warp required nearly 7 miles of thread, which would have taken many months to hand‐spin. By purchasing the warp thread, I was able to present a much more manageable (though still large) project to my helpers.

Spinning was the most common activity of a medieval woman’s life, as there was a constant need for new clothes, bed linens, blankets, etc. The only way to provide them was through the production of new thread and new cloth. Spindle whorls are ubiquitous in any archeological site (see the variety of whorls found in London [Egan, 1998, pp. 256‐261], or the spindle whorls found in Greenland [Ostergard, 2004, pp. 45‐52]) Images of spinners using drop spindles, both top and bottom whorl, and, later, spinning wheels (usually quill wheels) are easily found throughout medieval times. Books of instruction for women (e.g., Markham, 1986, pp. 146‐152, specifically paragraph 18) often included detailed instructions on the correct manner to process wool for spinning, spinning on a wool wheel, and ultimately, weaving.

The weft thread is Z‐spun, with a reasonably consistent diameter of 1‐2 mm. Threads of this size are quite common in many cultures in medieval times. (See the charts of thread sizes in Bender‐Jorgensen, 1992, Crowfoot, et al., 1992, and Ostergard, 2004.) My thread was spun with a fairly short draw and a fairly tight twist, producing a smooth, semi‐worsted yarn. Since the warp yarn was slightly fuzzy, I was hoping to keep the weft thread as smooth as possible, given the fiber involved, in the hopes that the fabric would not full too intensely when washed, and shrink to such an extent that there would not be enough fabric to finish the cloaks. When the cloaks were cut and sewn together, there was less than a foot of waste fabric in the end of the woven cloth. (Note: When the woven fabric originally came off the loom, it was over 40’, yet the length of the fulled fabric, in the end, was only 36’ 9”.)

As each bobbin was spun, the thread was wound off into balls suitable for long‐term storage. Often they sat for several months before being used for weaving. While no particular care was taken to set the spin, there were very few tangles during the weaving, and the final cloth shows no effects from the lack of further processing.

Sample balls of handspun thread for the cloaks

I am very happy with the thread. My spinning improved greatly from two years of intense spinning, and I am much more confident with both my wheels and my drop spindles than when I began. I am no longer at all daunted by the prospect of facing a dirty fleece and processing it all the way through to finished cloth. And I hope I was able to promote spinning as a fun activity among some of the other members of my barony. With luck, we may get some more fiber artisans from my efforts.

The main problem I had while processing the wool was keeping more of the fleece ‐‐ and trying to clean it ‐‐ than was truly necessary or actually practical. The fleeces clearly needed more skirting than I was able to give them ‐‐ they had been jammed into sacks, and no care was taken in the arrangement of the fleece. Unfortunately, I didn’t have the time to sort out the locks. With my next project, I should have more time, and not need to hurry my processing as I did here. By maintaining locks, and washing them more carefully to minimize processing problems, I may have fewer problems with combing and carding, which will ultimately make my spinning easier and my thread a little cleaner.